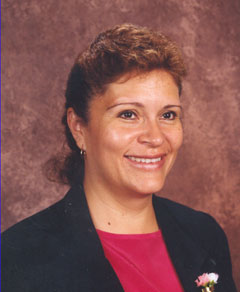 Bertha Rios was raised in La Piedad, Michoacan, Mexico, in a house with four sisters, one brother and no books. Earning a living there was very difficult, resulting in Bertha's father being absent for much of her childhood while working in the United States. At the age of 17, it was this same economic necessity that brought Bertha and her dreams to the United States. This early sense of financial deprivation, combined with a strong work ethic and desire to better herself, led Bertha to where she is today. She is now a highly successful bilingual first grade teacher, serving as a role model for her family, students and community.

As a young mother in Mexico, Bertha found herself with a one-year old baby with health problems, and with few resources to better her situation. She was also in the same circumstances as her mother had been, a husband working and living far away from home. At this point, they decided that she would join him in Napa. Equally compelling for the move was the fact that her parents had just taken up permanent residence in California. She arrived in October of 1980, and was employed for two years picking grapes, in order to help the family financially. She and her husband, Salvador, lived with Bertha's parents, and she recalls that their daughter, Cinthia, slept in a cardboard box. "I tell my children this story now, so they know how it was." Bertha spoke no English, and describes this period of time as complete culture shock. "At that time, people were not very friendly to Mexican immigrants, and I received many of 'those looks.' I missed my little town, and whenever I went to the store, I asked myself what I was doing here. I didn't fit in."

Bertha's next few jobs after working in the fields, were babysitting, cleaning houses and factory work. Her choices were limited by her lack of English, and further so, when she lost her job during a period of immigration sweeps, and had to "voluntarily quit." (Bertha applied for and received legal amnesty in 1987). This turned out to be a turning point in her education and eventual success. "I was worried about not giving money to my family, so to help myself in some way, I began to run on the track at the Adult School campus. One day, I talked to myself, and said “I'm not wasting time by exercising, but why don't I go to the school and ask for some information.” Bright and early the next morning, Bertha was at the Napa Valley Adult School office. She started the next day, taking ESL classes four mornings a week, cleaning houses in the afternoons, and caring for her family. She continued with this regimen for one year, stating "I never, never stopped, and that is what helped me. English was not easy; it was very, very hard, but what motivated me when I thought about not going for a day, was that I knew the next day would be even harder. These thoughts inspired me to keep going." Bertha's tenacity resulted in a 6 hour per week job as a bilingual aide at the Adult School. Her next step was to transfer to Napa Valley College, where she took ESL and general education classes, but with no particular goal in sight yet.

As Bertha's English skills increased, so did her sense of the options available to her. She had been a secretary in Mexico, but knew she wanted to do something different. She began to realize the impact that her adult school teachers had had on her, and decided she wanted to become a teacher. When she first proposed this to her husband, he emphatically replied, "no way, we're talking about a long career, and you won't pay attention to me and Cinthia." Bertha pleaded with her husband to let her try, but he rejected the idea two more times. On the third try, Bertha implored, "You know what? I really love school. I want to be something different, and I want to help give my community back what I received." Finally, her husband agreed and became one of her biggest supporters. Bertha spent two years at Napa College, then twelve years from start to finish at Sonoma State University. During that time, she was a "full-time mom and full- time employee," with two more children in the meantime. She was exhausted in the evenings, with family obligations and homework, but never lost sight of her goal to become a teacher, inspired by her own Napa Valley Adult School teachers, Rhonda Slota and Marilyn Knight-Mendelson.

When Pomp and Circumstance played at Sonoma State University's 1998 graduation, Bertha's whole family, (husband, three children, parents and brother), was there to see her receive her B.A. Two years later, she ended her journey by completing the requirements for her teaching credential. She has now been employed as a bilingual teacher in the immersion program at Napa Valley Language Academy, a public elementary school, for eight years.

Bertha's advice to anyone is, "Continue with education. Do not stop! That's my big advice. It is not easy; it's very hard, but keep going." As to what she credits for her support during these years, "God helped me a lot-- and my husband, once I convinced him!"