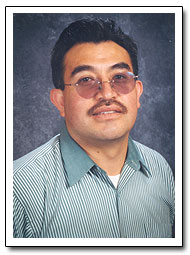 Jose Humberto Camacho was born and raised in a poor suburb north of Mexico City. His parents never attended school, but they always instilled hope, responsibility and respect in their children. Trying to make a better life for his family, Jose Humberto’s father moved to Watsonville, CA in search of work. As the eldest of seven children, Jose Humberto, now in his early teens, was forced to find whatever jobs he could in order to help support his family in Mexico.

“It was at this point when education became an obsession for me, to escape poverty and as a way of self-empowerment. I knew that I needed to be a good role model for my brothers and sisters,” says Jose Humberto, “While I worked shining shoes, selling treats on the street and singing on the buses for tips, I studied hard and tried my best at school. It was difficult for me because as a teenager, I studied in the morning, worked in the afternoon, and finished my homework at night. Eventually, my efforts were rewarded, and after years of study and work I graduated from the National Polytechnic Institute in Business Administration, earning the title of Licentiate in Commercial Relations with Specialization in International Commerce. I got a job in the department of Imports and Exports in a manufacturing company, where I worked for several years. I had reached my professional goals and economically supported my mother and siblings."

In 1987, at the age of 26, Jose Humberto made the decision to come to the United States. He briefly returned to Mexico several months later to ask for his girlfriend's hand in marriage. With his new wife Jose Humberto moved back to the United States permanently to start their new life. Unexpected was that it really would be starting over. Limited English skills and a lack of work experience in the U.S. made finding work in his profession impossible. Being ever resourceful, Jose Humberto forged ahead and worked at many different low paying jobs in agriculture and at a cushion factory, while also playing with a band in restaurants.

Determined to advance himself, he started studying English and then GED Preparation at Watsonville Aptos Adult Education in 1989. Work and family forced Jose Humberto to be flexible with his study. His first daughter was born this year, and classes had to be scheduled around shifting work hours. Fortunately, adult education provided him with the needed flexibility and support.

"Here is where I found supportive and caring educators who motivated me to not give up in my aspirations,” he says of his five years at Watsonville Aptos Adult Education. “It was in the adult school that I realized I wanted to become a teacher. I knew I would be able to learn enough English to go back to college and start a new career in the United States. There were many wonderful and supportive teachers and one in particular helped me apply and register at Cabrillo Community College. I call her one of my angels. She was also the one who encouraged me to complete my GED."

With growing experience and knowledge provided by the adult school, Jose Humberto was steadily able to advance to better jobs in a cannery, moving from packing to janitor and then to mechanic and inspector. "At first my wife didn't understand why I was spending so much time in school, since I was doing better, but my dream was to become a teacher. Soon however, as she understood, my wife, who is a supportive person, nourished my soul to envision a better kind of life in the land of opportunities. My children also became my inspiration to reach my professional goals." With this love and support, Jose Humberto entered Cabrillo College in Watsonville, California, in 1994, when his second daughter was 2 years old.

Still working at the cannery full time, he graduated with an AA degree from Cabrillo College in 1999, and immediately enrolled in the National Hispanic University in San Jose, California. The Bachelor's Degree he earned in Mexico led to an invitation to work as a Migrant Support Teacher for the Pajaro Valley Unified School District. "I felt like the luckiest person in the world when I was accepted to the University and then even luckier when I started working for the Pajaro Valley Unified School District Migrant Program as a Migrant Support Teacher at Mintie White Elementary School in Watsonville, California," relates Jose Humberto. "Being a full time worker, a full time parent, and a full time student was not easy, but in spite of all the hard work, I enjoyed every moment of my second opportunity as a student. It took me another five years to complete the university and my teaching credential. It is true that my wife supported me every step of the way, but I must say at times she was skeptical. Sometimes she asked me why I was spending so much time studying, since I had a good job in the cannery with good benefits. I told her my dream was to become a teacher and, of course, she understood and supported me. Five years later, in 1999, when I was graduating from the university, the cannery closed and all of my co-workers lost their jobs. We both knew then that we had made the right decision, even though it had been a strain on our family."

Upon graduation from University, and after 15 years studying in the United States, Jose Humberto fulfilled his dream and became a Migrant Education teacher. He continues to work at Mintie White Elementary School, and in the fall of 2005 he also began to work evenings at Watsonville Aptos Adult Education as a Student Advisor, where he already is a beloved member of the school community. He is actively involved empowering students through the Student Council and, with the students, in preparation for the 150th anniversary of Adult Education in California. He visits students in all 50 evening ESL classes, serving as Advisor, telling his own story and then meeting individually with students, advising and motivating them. He feels that his life has come full circle.

"I have a job where I can empower my students to make positive contributions in their lives. I work with both the children and their parents. Six months ago my former teacher at the adult school called me and asked if I would like to come and work with her. I was thrilled and overjoyed with the opportunity to go back to where I had begun. I now work closely with this former teacher as the evening ESL Student Advisor. It is a joy to go into the classes and tell the adults learning English that I used to be sitting in those same chairs and because of my start at the adult school, I am now a teacher."

With the birth of his youngest son and daughter in 2001 and 2002, Jose Humberto continues his commitment to family, education, empowerment and community. He has coached his 2 older daughters' soccer teams; taught guitar classes at Casa de la Cultura, a social service agency serving poor people in the community of Pajaro, California, and at the Santa Cruz County Sheriffs Rehabilitation facility. For 12 years he played in a band called "La Estudiantina" in schools, convalescent hospitals and restaurants. Currently, he is very involved in Cara and Corazon, a weekly workshop that strengthens family relationships, educates about gang and drug prevention, and validates Latino values and cultural identity. In all that he does, Jose Humberto says, "I transmit my experience as a student, as a parent, and as a teacher to motivate others to become successful people and to create dreams in this land of opportunities, and I always say to them that “Si se puede” (Yes we can).