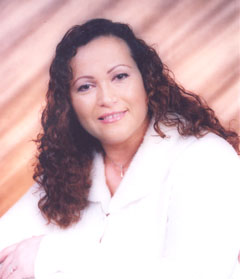 Trinidad Estrada was a stay at home mom in Chihuahua, Mexico. Her husband had come to the United States to find work. In September of 1991, Trinidad came to the United States with her two daughters to join her husband.  The next year, she had her third child, and that year she came to the United States with her three daughters to join her husband.  She didn't know how to read or write in English. The day of her arrival in the U.S., Trinidad’s husband took her to Baldwin Park Adult and Community Education (BPACE) where he had been taking ESL classes, and she enrolled in a Basic Education class. Her teacher, Morgan Zo, helped her with her reading, and she remembers him always encouraging her to keep trying. His words of encouragement fueled her determination to get her high school diploma.

After two months she decided she wanted to get her high school diploma. When Trinidad met with Eulalio Ballesteros, a bilingual counselor at the Adult Education Center, she was directed to the English as a Second Language program, which was the designated path. She was told she needed to take ESL classes first to learn the language. She walked back to her car discouraged but then turned around more determined than ever, she went back and told her counselor that she knew she could do it. She insisted that he give her a chance, and he hesitantly agreed. Her counselor was able to see her as a unique individual. She was not forced to fit into a mold, and he gave her a chance.

Trinidad's first high school subject was U. S. History, and she couldn't read the first page. Her instructor, Larry Wadahara at the Adult Career Training Center, gave her a huge, thick Spanish-English dictionary. That gift can still be found in her home and has special meaning for her. She copied the words on Post-Its, which she placed around her home. She studied her vocabulary words while doing household chores. She received individual attention and assistance with essays, projects, and computer assisted programs. Through all her hard work and the help of her instructor, she graduated a year later.

The following year she decided to continue her education by enrolling in a medical assistant class. Her mother was a nurse practitioner in Mexico and she had enjoyed reading her books. She found her instructor, Bonnie Perrin, to be very strict. She demanded the most out of Trinidad, but she also had a special way of encouraging her. She remembers practicing with mannequins, drawing blood and running lab tests. She received hands on training during her externship at Glendora Clinic where she worked both the front and back office. She graduated a year and a half later with top honors.

Trinidad quickly found a job and worked as a medical assistant. After two years they let her go because she didn't have any legal papers.

Trinidad wanted to pursue her education even higher but could not due to the fact that she had no legal papers and college was very expensive.

Trinidad is currently attending college and will graduate in 2006 with a Bachelor of Science degree in Human Services. She will soon be moving into a supervisory position but before she makes that move, she will be training those that will follow her. She has referred others to join her here at BPACE because adult education has been a blessing in her life.