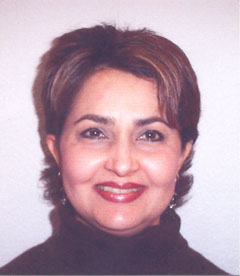 Luz Gauna-Sanchez came to the United States from Mexico as a non-English speaking newlywed in 1977. In Mexico she was a High School graduate and had attended business college. She came to Woodland, California with her husband and started a family. She began taking classes at Woodland Adult Education in 1978 in English as a Second Language. Her goal was to learn English and get an education so that she could get a good job. As she continued to improve her English, she studied and passed the GED in 1979. She continued through 1980 to take ESL classes to further improve her English. Her ESL teacher, Bill Knabke advised her to apply for a job in the school district. She got her first job in the Woodland Joint Unified School District working at Woodland Adult Education in 1980 as a part-time clerical aide in the evening. She was promoted to full-time within two years. Her job responsibilities increased over the years as she became a Bilingual Secretary and then an Administrative Secretary. Eventually she became an Alternate Examiner for the GED and was able to administer the test to adult students. Because of the encouragement given to Luz by her supervisor, Al Peterson, Luz became a citizen of the United States in 1983. She continued to raise her family and gain more experience and responsibility at Woodland Adult Education. Luz remarried in 2002 and her children are now adults who are working and attending college. In 2000 she became the office manager in charge of the entire office and classified staff.

Luz celebrates her 26th year as an employee of Woodland Joint Unified School District, all of them as part of Woodland Adult Education where she began. She has received 5 awards from the WJUSD for Professional Development because of her continuing education at Woodland Community College. When she started at Woodland Adult Education, the school was housed on the Woodland High School campus. In 1989 the school moved to its own building at 575 Hays Street. In June of 2005 the school office moved within the building to a larger area and Luz got her own office with real walls and a door. Since being hired initially, Luz has had five supervisors during her 26 years: John Davis, Al Peterson, Dean Andoe, Barry Cooper and Susan Moylan. It is often said by the Principal that Luz is the one that runs the school.

Luz exemplifies excellence and professionalism and is an outstanding example of the success of Adult Education students in California.