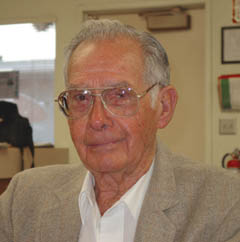 After a tour of duty in the Army during World War II and reenlisting in the Navy during the Korean War, William Overstreet, better known to his friends as Billy, chose to settle in California when his military service was over. He worked for the Post office in Los Angeles County and was a real estate broker for 25 years. During this time he married and raised three sons.

After a massive heart attack, along with other health problems, Billy retired from his job. Thinking he might die, he went through a period of depression, but then decided to enroll in the Baldwin Park Older Adult Fitness class. After class one day, he began talking to Denise Tornatore, teacher on special assignment at BPACE, about his goals to become a writer. She and John Kerr, Vice-Principal at BPACE, recommended he enroll in their ABE program.

Little did he know that enrolling in their program would allow him to expand his horizons and fulfill a lifelong dream of writing and becoming an author. Through this class and with guidance from the Older Adult Department, Billy developed his writing ability and improved his computer skills. Billy presented his book "Sisters Weep No More" to Morgan Zo, one of the program's teachers, to read. He agreed that if he liked the book, he would help him with it. Morgan liked the book so well that he said he couldn't put it down, so he began helping Billy edit the book. When they were done with it, Billy was able to get his first book published.

Billy is now a very visible member of the community, participating in a number of adult education classes, writing novels and conducting book signings at the community center and local library. He has been acknowledged for his accomplishments by various community organizations and legislative bodies.

At 77 years of age Billy exemplifies the meaning of lifelong learning. He is currently working on some children's books and a book about his grandfather. He continues to write for both pleasure and to supplement his retirement income through his book sales. He is a strong role model for his peers and those entering their post retirement years.

Picture of the ACSA Conference